What Does SLAP Mean?

The abbreviation SLAP is commonly used with the meaning "Sounds Like A Plan" as a positive response to a suggestion.

When I write SLAP, I mean this: 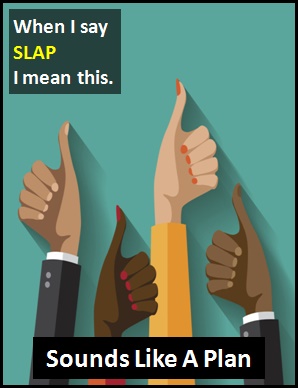 Examples of SLAP in Sentences

Here are examples of SLAP being used in conversations:

An Academic Look at SLAP

As it is spoken like a word, SLAP is an acronym. Acronyms contrast with initialism abbreviations, which are pronounced using their individual letters.

SLAP is an abbreviation of "(That) Sounds Like A Plan" and is commonly used as a standalone declarative sentence (i.e., a statement). In other words, it is not always used as another part of speech within a wider sentence.

Example of SLAP Used in a Text

SLAP
Help Us To Improve Cyber Definitions
Please tell us using this form.