What Does SKO Mean?

The acronym SKO is typically used in text-based messaging with the meaning "Let's Go." It based on the similarity of the sound made when saying "Let's Go" to that made when pronouncing SKO as a word.

When I write SKO, I mean this: 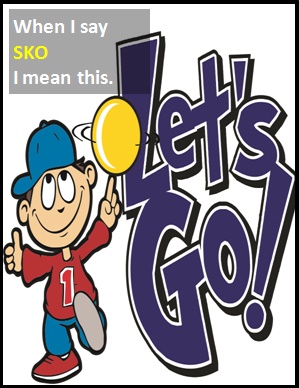 Examples of SKO in Sentences

Here are examples of SKO being used in conversations:

An Academic Look at SKO

SKO is best described as a contraction of the standalone declarative sentence "Let's Go." It commonly stands alone and doesn't normally form part of a wider sentence.

Before the digital era, we would have just said something like "Let's Go" instead of using the abbreviation SKO.

Example of SKO Used in a Text

SKO
Help Us To Improve Cyber Definitions
Please tell us using this form.