What Does SKL Mean?

SKL is widely used as a contraction of the word "Skool," which is written slang for "School." SKL is one of many abbreviations of the word "School" in common use. Others include:

If you're working in the field of cryptography, then SKL stands for "Simple Key Loader." In this context, an SKL is used to load cryptographic keys into secure devices.

"Share Ko Lang" is another common definition for SKL.

"Simple Key Loader" is a specialist definition for SKL.

When I write SKL, I mean this: 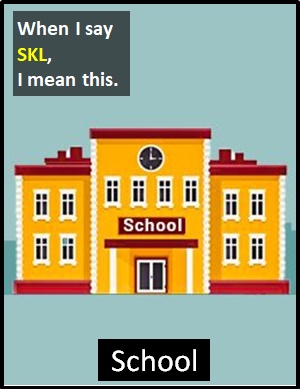 Examples of SKL in Sentences

Here are examples of SKL being used in conversations:

An Academic Look at SKL

When used with the meanings "Share Ko Lang" or "Simple Key Loader," SKL is pronounced using its individual letters (i.e., "Ess Kay Ell"). Therefore, it is classified as an initialism abbreviation. However, it is not often spoken using its letters. SKL is usually employed for efficiency in writing and not efficiency in speech.

For more information on contractions and other types of abbreviations, check out this page.

Example of SKL Used in a Text

SKL
Help Us To Improve Cyber Definitions
Please tell us using this form.