What Does SHADOWBAN Mean?

On TikTok, a user who has had their visibility reduced due to misconduct usually doesn't get made aware. As a result, their videos will stop appearing on TikTok's "For You page" (FYP) as frequently as they did before.

A shadow ban is slightly different to a regular ban as the ‘shadow’ part of the phrase refers to the fact that a user wouldn’t know that the ban has happened. They would only guess by their drastic drop in engagement. Because there's no way to confirm a shadowban, some users may claim to have been shadowbanned, when in reality, their content just isn't very popular.

When I write SHADOWBAN, I mean this: 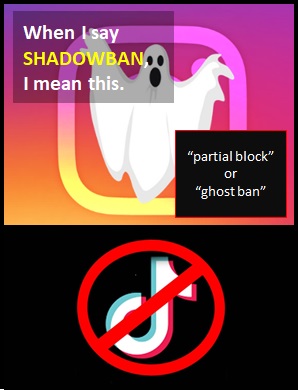 [A shadowbanned person's videos won't appear on the For You Page.]

Examples of SHADOWBAN in Sentences

Here are examples of SHADOWBAN being used in conversations:

An Academic Look at SHADOWBAN

Shadowban is typically used as a noun (i.e., a naming word). For example:

(Here, SHADOWBAN is being used as a noun.)

Example of SHADOWBAN Used in a Text

SHADOWBAN
Help Us To Improve Cyber Definitions
Please tell us using this form.