What Does SFW Mean?

The abbreviation SFW is typically placed in the title of a message to indicate that the message can be opened safely in a work environment (i.e., it is "Safe For Work"). SFW usually indicates that the message content will not cause offense to the recipient's boss or work colleagues. SFW does not mean that the message is work-related. Therefore, such communications should not normally be opened in the presence of colleagues or supervisors, except during breaks from work (e.g., during lunch or coffee breaks).

SFW contrasts with the following terms: Beware "Seemingly SFW." As the term SFW has grown more popular, it has developed a secondary, more nuanced meaning, which is best described as "seemingly innocent." This typically involves a picture of an adult nature that has been edited to replace the adult content with innocent content, as in this picture: 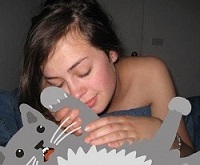 Particularly amongst specialists in IT, SFW is used with the meaning "Software" (i.e., those elements of data or computer instructions that tell a computer system how to work, as opposed to HW (Harware), which are the elements from which the physical system is built).

When I write SFW, I mean this: 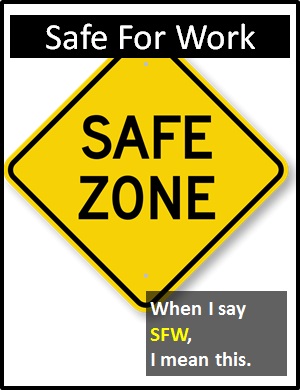 Examples of SFW in Sentences

Here are examples of SFW being used in conversations with the meaning "Safe For Work":

An Academic Look at SFW

When used with the meaning "Safe For Work," SFW is mostly used as a standalone declarative sentence (i.e., a statement). However, it is sometimes used as an adjective. For example:

(Here, SFW is an adjective.)

For reasons of brevity in text-based conversations, contractions are rarely followed by periods/full stops and apostrophes are routinely omitted.

Example of SFW Used in a Text

SFW
Help Us To Improve Cyber Definitions
Please tell us using this form.