What Does ROTF Mean?

ROTF means "Rolling On the Floor."

The abbreviation ROTF is used in text-based messaging with the meaning "Rolling On the Floor" to indicate amusement. ROTF is typically used to emphasize genuine amusement. However, it can also be used sarcastically. As with all such abbreviations, the context is crucial to understanding the true meaning intended by the sender.

There are many variations of ROTF with the same or similar meanings, including:

When I write ROTF, I mean this: 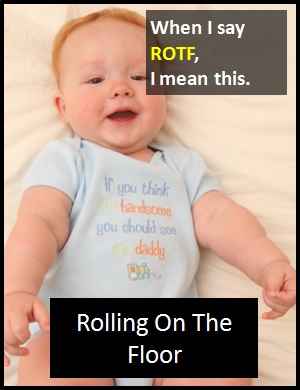 Examples of ROTF in Sentences

Here are examples of ROTF being used in conversations:

An Academic Look at ROTF

As it is pronounced using its individual letters (i.e., "Arr Oh Tee Eff "), ROTF is classified as an initialism abbreviation. Initialisms are different to acronyms, which are spoken like words.

ROTF is typically used as a standalone declarative sentence (i.e., a statement). It is not normally used as another part of speech within a wider sentence.

Before the digital era, we might have said something like "That's Really Funny!" instead of using ROTF with the meaning "Rolling On the Floor."

Example of ROTF Used in a Text

ROTF
Help Us To Improve Cyber Definitions
Please tell us using this form.