What Does REMOANER Mean?

REMOANER means "Anyone Not Expressly In Favour Of Britain's Exit From The European Union (Pejorative Term)".

The word REMOANER is used to describe "Anyone Not Expressly In Favour Of Britain's Exit From The European Union," as decided in the referendum of June 2016. REMOANER is used to refer to anyone who raises any concerns about the possible negative impacts of BREXIT (British Exit).

REMOANER is a pejorative term, typically used to stifle debate. However, between friends with different opinions, it can also be used in a light-hearted, humorous way.

"Anyone Not Expressly In Favour Of Britain's Exit From The European Union (Pejorative Term)" is the most common definition for REMOANER on Snapchat, WhatsApp, Facebook, Twitter, Instagram, and TikTok.

When I write REMOANER, I mean this: 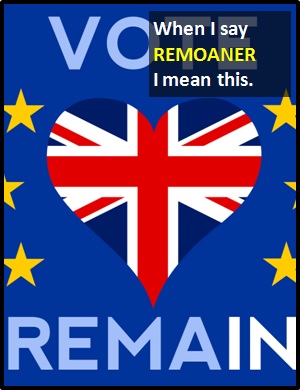 A REMOANER is anyone who questions the benefits of BREXIT.

Examples of REMOANER in Sentences

Here are examples of REMOANER being used in conversations:

An Academic Look at REMOANER

As it is formed by merging two words into one, REMOANER is classified as a portmanteau word. (It is formed by amalgamating remain and moaner.)

Before the digital era, we might have said something like "Those who won't accept we are right" instead of using REMOANER.

Example of REMOANER Used in a Text

REMOANER
Help Us To Improve Cyber Definitions
Please tell us using this form.

WYLSCWTW (Would You Like Some Cheese With That Whine?) MIS (Miserable) DITD (Down In The Dumps (I.E. Miserable))