REDONCULOUS plays on the idea that the syllables "e" and "o" are both heavier than the syllable "i," meaning redonculous has more gravitas than ridiculous.

When I write REDONCULOUS, I mean this: 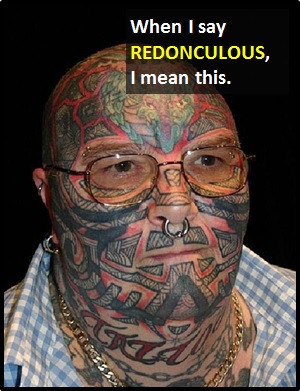 The image shows a man with tattoos that most people would consider beyond ridiculous (or redonculous).

Examples of REDONCULOUS in Sentences

Here are examples of REDONCULOUS being used in conversations:

An Academic Look at REDONCULOUS

REDONCULOUS is typically used as an adjective (i.e., a describing word). For example:

Before the digital era, we might have said something like "extremely unwise" or "totally foolish" instead of REDONCULOUS.

Example of REDONCULOUS Used in a Text

REDONCULOUS
Help Us To Improve Cyber Definitions
Please tell us using this form.