NEXY means "Nerdy And Sexy." The abbreviation NEXY is a portmanteau word formed from the words: "Nerd" and "Sexy." A "Nerd" is someone who is either boringly studious or single-mindedly expert in a given field. "Sexy" means someone who is sexually attractive.

Being called a "Nerd" can be taken either as an insult or a compliment. However, NEXY tends to be considered a compliment. It recognises someone's intelligence, whilst acknowledging their sex appeal.

Well-known NEXY people include American actors Mayim Bialik, who holds a doctorate in Neuroscience, and Natalie Portman, who has a degree in psychology.

When I write NEXY, I mean this: 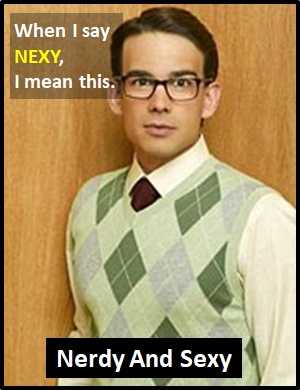 Girls can also be NEXY.

Examples of NEXY in Sentences

Here are examples of NEXY being used in conversations:

An Academic Look at NEXY

As it is formed by merging two words into one, NEXY is classified as a portmanteau word. It is formed by amalgamating Nerd and Sexy. NEXY is typically used as an adjective (i.e., a describing word). For example:

Before the digital era, we might have just said "Nerdy And Sexy" instead of using NEXY.

Example of NEXY Used in a Text

NEXY
Help Us To Improve Cyber Definitions
Please tell us using this form.