What Does NERD Mean?

The term NERD is generally accepted to describe a "clever but socially awkward person." Of note, however, NERD is quickly moving away from a word with a negative connotation (i.e., to brand someone as uncool). Recently, NERD has evolved into a more positive term that simply describes someone with a passion for something (i.e., a science NERD, a music NERD, or a food NERD). It is even starting to take on a cool edge, and increasingly more people are happy to have themselves labelled as a NERD.

When I write NERD, I mean this: 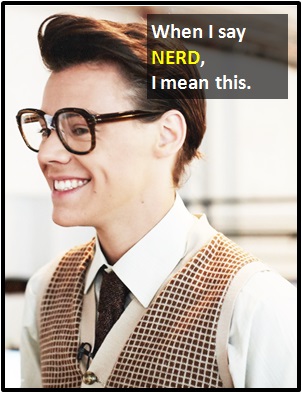 A NERD is someone who excels in a subject deemed to be uncool.

NERD means "Clever but socially awkward person." This is the most common meaning for NERD on social-media platforms such as Twitter, Facebook, and Snapchat.

Examples of NERD in Sentences

Here are examples of NERD being used in conversations:

(Here, NERD is offered with a negative connotation.)

(Here, NERD is offered with a positive connotation.)

An Academic Look at NERD

(Here, NERD is being used as a noun.)

Before the 1950s, when NERD was first introduced into society, we might have said something like "drip" or "square" instead of NERD.

Example of NERD Used in a Text