What Does MLS Mean?

The abbreviation MLS is widely used to refer to "Major League Soccer," which is a men's professional soccer league that represents the sport's highest level in both the United States and Canada.

When used with the meaning "My Life Sucks," the abbreviation MLS is typically used in a joking way to indicate that the sender is not happy. Although usually meant as a joke, MLS can sometimes be used seriously, especially in response to a run of bad luck or on the ending of a relationship.

MLS means "Major League Soccer." This is a common definition for MLS on Snapchat, WhatsApp, Facebook, and Twitter.

MLS also means "My Life Sucks." This is another common definition for MLS on Snapchat, WhatsApp, Facebook, and Twitter.

When I write MLS, I mean this: 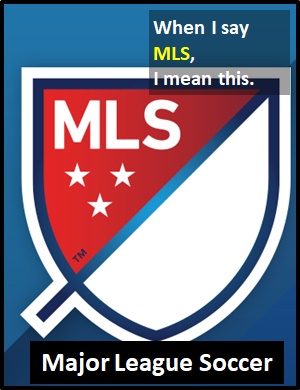 Examples of MLS in Sentences

Here are examples of MLS being used in conversations:

An Academic Look at MLS

Whether used with the meaning "Major League Soccer" or "My Life Sucks," MLS is pronounced using its individual letters (i.e., "Emm Ell Ess"). It is classified as an initialism abbreviation. Initialisms are different to acronyms, which are spoken like words.

When used with the meaning "My Life Sucks," MLS is typically used as a standalone declarative sentence (i.e., a statement). It is not normally used as another part of speech within a wider sentence.

Before the digital era, we might have just said "My Life Sucks," or something like "I hate my life" instead of using the abbreviation MLS.

Example of MLS Used in a Text

MLS
Help Us To Improve Cyber Definitions
Please tell us using this form.