What Does MHMM Mean?

MHMM (pronounced as "Um-hermm" or "Um-humm") is an interjection commonly used in English to express agreement (i.e., to say "Yes"). However, depending on the emphasis placed on the syllables, it may also be used to question something that has just been said (as in "Really?"). Context is crucial to understanding the intended meaning.

When used to mean "Yes," MHMM can express emphatic agreement, but it can also indicate a lack of interest or enthusiasm. (See examples below.) In this context, MHMM is also often typed as MHM.

In this short clip from the TV Show Family Guy, various uses of MHMM are demonstrated perfectly.

"Really?" is another common definitions for MHMM.

When I write MHMM, I mean this: 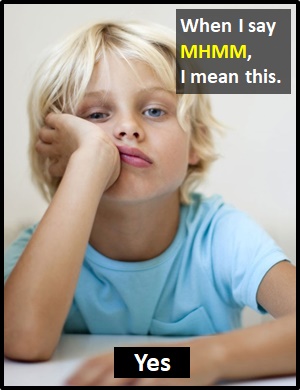 MHMM often expresses a lack of interest. It can also mean "Really?"

Examples of MHMM in Sentences

Here are examples of MHMM being used in conversations:


(Here, MHMM means "Yes" and indicates a lack of interest.)

An Academic Look at MHMM

MHMM is a slang word. Slang refers to words, phrases and uses of language that are regarded as very informal and which are often restricted to a special context or a particular group of users.

The use of MHMM to mean "Yes" or "Really?" long pre-dates the digital era.

Example of MHMM Used in a Text

MHMM
Help Us To Improve Cyber Definitions
Please tell us using this form.