MBFAM means "My Brother From Another Mother."

The abbreviation MBFAM is used with the meaning "My Brother From Another Mother" as a term of endearment between boys and young men, as well as by men of any age who have served in the military or police. It implies that the sender considers the subject to be one of their most special friends.

MBFAM has the same meaning as BFAM (Brother From Another Mother).

The saying "My Brother From Another Mother" is thought to have first been used in the 2006 film "Snakes on a Plane." It was subsequently used in the 2007 film "Rush Hour 3."

When I write MBFAM , I mean this: 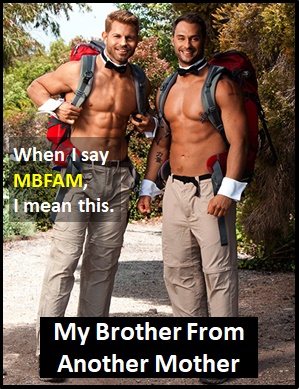 MBFAM is my best friend.

Examples of MBFAM in Sentences

Here are examples of MBFAM being used in conversations:

An Academic Look at MBFAM

As it is pronounced using its individual letters (i.e., "Em Bee Eff Ay Em"), MBFAM is classified as an initialism abbreviation. Initialisms are different to acronyms, which are spoken like words.

Before the digital era, we would have just said "My Brother from Another Mother" instead of using the abbreviation MBFAM.

Example of MBFAM Used in a Text

MBFAM
Help Us To Improve Cyber Definitions
Please tell us using this form.