The term "Invited To Leave" became popular in business circles in 2017. It diplomatically describes the termination of the contracts of higher-level employees. Being "Invited To leave" makes it sound like the employee has the option to decline the invitation. However, this is not the case.

ITL is similar to the term "Downsizing," which is typically used as a euphemism for the mass firing of lower-level employees.

When I write ITL, I mean this: 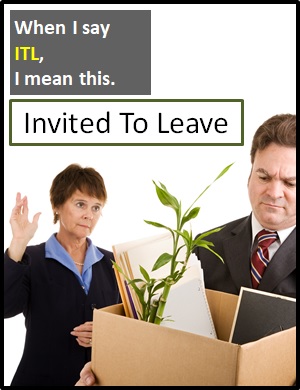 Examples of ITL in Sentences

Here are examples of ITL being used in conversations:

An Academic Look at ITL

As it is pronounced using its individual letters (i.e., "Eye Tee El"), ITL is classified as an initialism abbreviation. Initialisms are different to acronyms, which are spoken like words.

Before the digital era, we would have just said "Laid off" or "Fired" instead of ITL.

Example of ITL Used in a Text

ITL
Help Us To Improve Cyber Definitions
Please tell us using this form.