What Does DQYDJ Mean?

DQYDJ means "Don't Quit Your Day Job." The abbreviation DQYDJ is an idiomatic expression, which humorously suggests someone isn't very good at doing something. For example, if a friend played the piano really badly, "Don't quit your day job" would be a funny way to tell them that if they tried to rely on playing the piano for a living they would not be successful, and that their current job would be a safer option. Of note, this phrase should only be used informally.

When I write DQYDJ, I mean this: 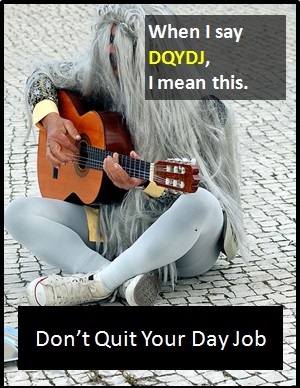 DQYDJ is a light-hearted way to tell someone they're not very good at something.

Examples of DQYDJ in Sentences

Here are examples of DQYDJ being used in conversations:

An Academic Look at DQYDJ

DQYDJ is an initialism abbreviation. This means it is pronounced using its individual letters (i.e., Dee Kyu Waye Dee Jay), but as this is harder to say than "Don't quit your day job" it is not often spoken using its letters. In other words, the abbreviation DQYDJ is for efficiency in writing and not efficiency in speech.

Example of DQYDJ Used in a Text

DQYDJ
Help Us To Improve Cyber Definitions
Please tell us using this form.