What Does B2W Mean?

B2W means "Back To Work." The abbreviation B2W can be used as an instruction to a subordinate, with the meaning "Get Back to Work." However, it is more often used as a way to bring a conversation to a conclusion, e.g., when texting with a friend during a break from work or study.

Of note, B2W is also widely used throughout the English-speaking world with the meaning "Bike To Work." In this context, B2W refers to schemes designed to encourage people to cycle to work, rather than drive.

When I write B2W, I mean this: 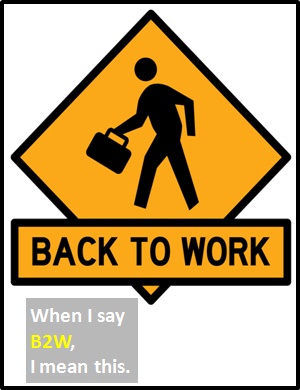 It's always fun to get B2W after some time away!

Examples of B2W in Sentences

Here are examples of B2W being used in conversations:

An Academic Look at B2W

B2W is defined as a cyber term because some of its characters are used as substitutes for letters. Most cyber terms were introduced to reduce the number of key strokes required to write the word, but since the arrival of predictive texting and keyboards on mobile devices, this efficiency is no longer required. Nevertheless, cyber terms are still regularly used to make messages more entertaining or to express individuality. Cyber terms differ from icons because they are not pictorial representations.

Before the digital era, we would have just said something like "Back To Work" instead of using the abbreviation B2W.

Example of B2W Used in a Text

B2W
Help Us To Improve Cyber Definitions
Please tell us using this form.