What Does INTK Mean?

INTK means "I Need To Know."

The abbreviation INTK is used with the meaning "I Need To Know" as a request for information or for clarification. While INTK is typically used as a straightforward request, it can also imply a sense of urgency or need. As such, INTK can be considered demanding (especially when followed by the word "now" or something similar). For example:

"I Need to Know" is the title of a song by American singer Marc Anthony, released in 1999. The English-language version of the song was a moderate hit in the US and elsewhere, but theSpanish version "Dímelo" reached number one on the Billboard Hot Latin Songs chart.

When I write INTK, I mean this: 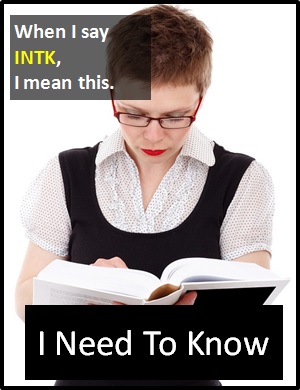 Examples of INTK in Sentences

Here are examples of INTK being used in conversations:

An Academic Look at INTK

INTK can be used as a standalone declarative sentence (i.e., a statement) or used as another part of speech within a wider sentence.

Before the digital era, we would have just said "I Need To Know" instead of using INTK.

Example of INTK Used in a Text

INTK
Help Us To Improve Cyber Definitions
Please tell us using this form.