What Does N2K Mean?

The cyber term N2K is used with the meaning "Need To Know" to indicate that certain information should only be shared with people who have a genuine requirement to know about it.

"Need To Know" is a principle applied to the handling of official or personal information of a sensitive nature. However, in text-based chat, N2K is typically used to refer to gossip or the planning of an event.

Whether used with the meaning "Need To Know" or "Nice To Know," N2K is often written as NTK.

N2K means "Need To Know." This is one of the most common definitions for N2K on Snapchat, WhatsApp, Facebook, and Twitter.

N2K also means "Nice To Know." This is another common definition for N2K on Snapchat, WhatsApp, Facebook, and Twitter.

When I write N2K, I mean this: 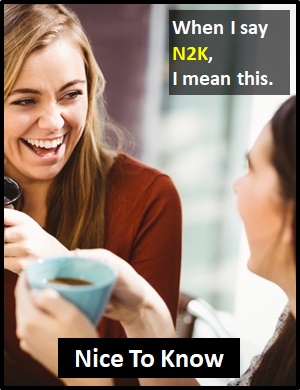 Examples of N2K in Sentences

Here are examples of N2K being used in conversations:

(Here, NTK means "Nice To Know" and is probably being used sarcastically.)

An Academic Look at N2K

Whether used with the meaning "Need To Know" or "Nice To Know," N2K is classified as a cyber term. Cyber terms were originally introduced for brevity but, particularly with the advent of predictive texting and on-screen keyboards, they are now mostly employed for fun. Cyber terms differ from icons because they are not pictorial representations.

Before the digital era, we might have just said "Need To Know" or "Nice To Know" instead of using N2K.

Example of N2K Used in a Text

N2K
Help Us To Improve Cyber Definitions
Please tell us using this form.