ILYSMB means "I Love You So Much, Baby". ILYSMB is one of the ways of telling someone you love them.

When I write ILYSMB, I mean this: 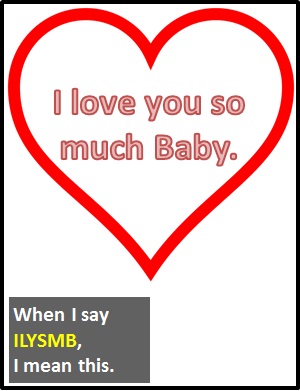 "I love you so much, baby" (ILYSMB) is one of the ways of saying "I love you" online.

Examples of ILYSMB in Sentences

Here are examples of ILYSMB being used in conversations:

An Academic Look at ILYSMB

ILYSMB is a declarative sentence (i.e., a statement). In other words, it is not used as a part of speech in a wider sentence.

When written in full "I love you so much, baby" should have a comma before the word "baby" to show the vocative case (i.e., to show that you are addressing someone directly).

Example of ILYSMB Used in a Text