IDWTAI means "I Don't Wanna Talk About It."

According to relationship counsellors, couples who regularly use the phrase "I Don't Wanna Talk About It" account for much of their workload. Each party is usually harbouring contradictory wishes that they are afraid to share, so they refuse to communicate and choose to sulk instead.

When I write IDWTAI, I mean this: 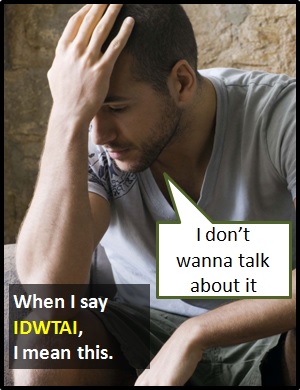 Examples of IDWTAI in Sentences

Here are examples of IDWTAI being used in conversations:

An Academic Look at IDWTAI

Before the digital era, we would have just said something like "I Don't Wanna Talk About It" instead of using IDWTAI.

Example of IDWTAI Used in a Text

IDWTAI
Help Us To Improve Cyber Definitions
Please tell us using this form.