What Does HBK Mean?

The abbreviation HBK is widely used with the meaning "The Heartbreak Kid." For movie fans, this usually means the 2007 movie of the same name. However, for wrestling fans, it usually refers to retired professional wrestler Shawn Michaels.

For movie fans, HBK is used to refer to the 2007 comedy movie "The Heartbreak Kid," which was directed by the Farrelly brothers and starred Ben Stiller. This HBK was widely regarded as a disappointing flop. (For example, the movie review aggregation website Rotten Tomatoes gives the film a score of 29%.) The film was a remake of a 1972 movie of the same name.

For lovers of WWE wrestling, HBK is used to refer to retired professional wrestler Shawn Michaels (real name Michael Shawn Hickenbottom), who used the nickname "Heartbreak Kid" (as well as "The Showstopper" and "Mr WrestleMania"). This HBK is considered to be one of the greatest professional wrestlers of all time. HBK's most well-known finishing maneuver was the Superkick, AKA Sweet Chin Music:

HBK is also commonly used to refer to former wrestler Shawn Michaels (AKA "The Heartbreak Kid.")

When I write HBK, I mean this: 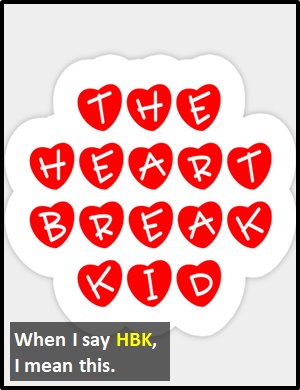 "The Heartbreak Kid" was a 2007 movie starring Ben Stiller and a nickname of wrestler Shawn Michaels.

Examples of HBK in Sentences

Here's an example of HBK being used in conversation:

An Academic Look at HBK

HBK is classified as an initialism abbreviation, because it is pronounced using its individual letters (i.e., "Aitch Bee Kay"). Initialisms are different to acronyms, which are spoken like words.

Example of HBK Used in a Text

HBK
Help Us To Improve Cyber Definitions
Please tell us using this form.