HAYD means "How Are You Doing?".

The phrase "How Are You Doing?" is a casual greeting in American English. It is a friendly question, which doesn't require a serious or honest answer.

In the American TV sit-com "Friends" the character of Joey coined the catchphrase "How you doin'?" as a cheesy pick-up line.

The abbreviation HAYD can be contracted further and written as HYD.

When I write HAYD, I mean this: 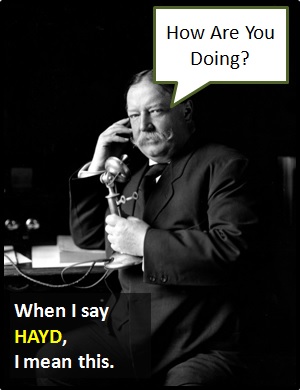 Examples of HAYD in Sentences

Here are examples of HAYD being used in conversations:

An Academic Look at HAYD

The abbreviation HAYD plays the role of an interrogative sentence (i.e., a question), but it is commonly seen without a question mark. It can be written "HAYD?" or "HAYD".

As it is pronounced using its individual letters (i.e., "Aitch Ay Why Dee"), HAYD is classified as an initialism abbreviation. Initialisms are different to acronyms, which are spoken like words.

Before the digital era, we would have just said something like "How are you?" instead of using HAYD.

Example of HAYD Used in a Text

HAYD
Help Us To Improve Cyber Definitions
Please tell us using this form.