GTSY means "Good To See You." The meaning of the abbreviation GTSY can be taken literally. Typically, it is used at the start of a conversation, but it can also be used as a polite way of ending a conversation.

When used to end a conversation, GTSY has a literal meaning similar to "I don't dislike you, but I don't want to spend time talking to you."

Of note, GTSY is sometimes translated as "glad to see you" or "great to see you," but "good to see you" rings more true to native English speakers.

When I write GTSY, I mean this: 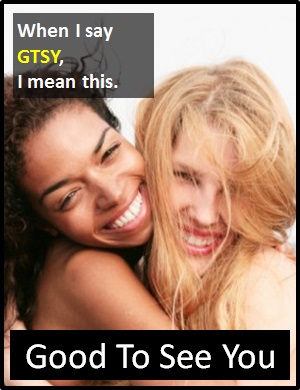 Examples of GTSY in Sentences

Here are examples of GTSY being used in conversations:

(Here, GTSY is being used to end a conversation politely.)

An Academic Look at GTSY

GTSY is used as a standalone declarative sentence (i.e., a statement) with the meaning "It is good to see you." (In other words, it is not used as another part of speech within a wider sentence.)

Before the digital era, we would have just said "good to see you" instead of GTSY.

Example of GTSY Used in a Text

GTSY
Help Us To Improve Cyber Definitions
Please tell us using this form.