What Does GP Mean?

The abbreviation GP has a number of popular meanings, including "General Practitioner" "Gay Pride," "Grand Prix," and "General Principle." Here is more information about each of these definitions of GP. (Examples of use can be found below.)

The abbreviation GP is widely used with the meaning "General Practitioner" to refer to a medical doctor based in the community who treats patients with minor, acute and chronic illnesses, and refers those with serious conditions to a specialist doctor or hospital.

GP is also used as an abbreviation of the term "Gay Pride." In this context, GP refers to the movement for the equality, dignity and rights of lesbian, gay, bisexual, and transgender (LGBT) people.

GP also stands for "Grand Prix." This is a French term which translates in English as "Grand Prize." In this context, the abbreviation GP appears in the title of a number of sporting events and competitions in a variety of fields, especially motor sport.

"Gay Pride" is another common definition for GP.

When I write GP, I mean this: 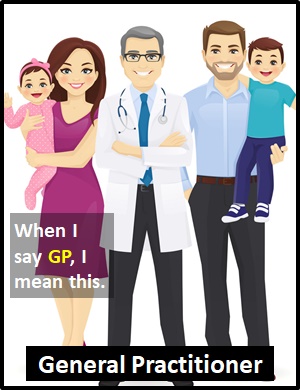 Examples of GP in Sentences

Here are examples of GP being used in conversations:

An Academic Look at GP

As it is pronounced using its individual letters (i.e., "Gee Pee"), GP is classified as an initialism abbreviation. However, it is also an acronym, as it is spoken like a word ("Geepee").

Example of GP Used in a Text

GP
Help Us To Improve Cyber Definitions
Please tell us using this form.