What Does GFU Mean?

The abbreviation GFU means "Get F*cked Up," "God Forgive Us," "Go F*ck Yourself," and "Good for You." Here is more information about each of these definitions of GFU, together with examples of use.

GFU is used with the meaning "Get F*cked Up" as a reference to getting extremely drunk or high on drugs.

GFU is typically used with the meaning "God Forgive Us" as a light-hearted plea to The Lord for forgiveness for an act or omission of trivial consequence. In this context, GFU is not usually employed as a serious plea for atonement. For example:

When used with the meaning "Go F*ck Yourself," GFU may be used to show anger, shock or surprise. In this context, GFU may be used humorously or aggressively. For example:

(Here, GFU may be a genuine expression of anger, but may also be being used humorously.)

"Go F*ck Yourself" is also abbreviated as GFY.

GFU is used with the meaning "Good for You" to congratulate someone. Beware! In this context, GFU is often used sarcastically. For example:

(Here, GFU is being used sarcastically.)

"Good for You" is also abbreviated as GFY and and G4U.

"God Forgive Us" is another common definition for GFU.

"Go F*ck Yourself" is another common definition for GFU.

GFU also means "Good for You."

When I write GFU, I mean this: 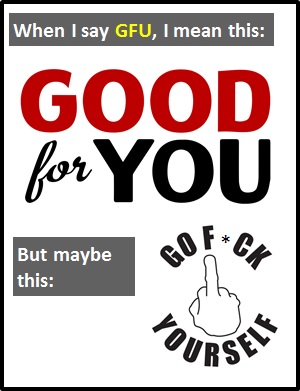 GFU also means "Get F*cked Up" and "God Forgive Us."

An Academic Look at GFU

GFU is an initialism abbreviation. This means it is pronounced using its individual letters (i.e., Gee Eff Yoo). Initialisms contrast with acronyms, which are spoken like words.

GFU is normally used as a standalone declarative sentence (i.e., a statement). It is not often used as another part of speech within a wider sentence.

Example of GFU Used in a Text

GFU
Help Us To Improve Cyber Definitions
Please tell us using this form.