What Does GBNF Mean?

GBNF (Gone But Not Forgotten) is used as a short homage to acknowledge the contribution of a person who has departed. GBNF is most often used to show respect for a recently deceased person, but it can also be used for a person who has moved away.

When I write GBNF, I mean this: 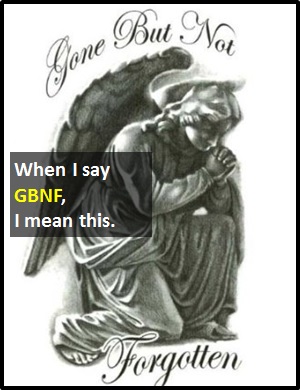 GBNF is used as a short homage to acknowledge the contribution of a person who has departed.

Examples of GBNF in Sentences

Here are examples of GBNF being used in conversations:

(Here, GBNF is used for a person who has died.)

(Here, GBNF is used for a person who has moved away.)

An Academic Look at GBNF

GBNF is an initialism abbreviation. Technically, this means it is pronounced using its individual letters (i.e., Gee Bee En Eff), but as this is harder to say than "gone but not forgotten," it is not usually spoken using its letters. In other words, the abbreviation GBNF is for efficiency in writing and not efficiency in speech.

Before the digital era, we might have said something like "he'll be sorely missed" or "he'll keep a place in our hearts" instead of GBNF.

Example of GBNF Used in a Text

GBNF
Help Us To Improve Cyber Definitions
Please tell us using this form.