When I write GBFN, I mean this: 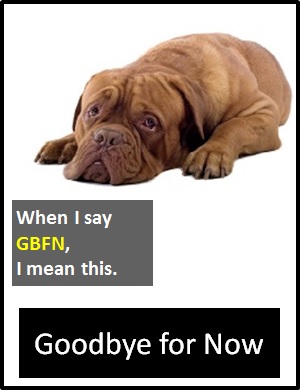 GBFN means "Goodbye For Now." The abbreviation GBFN is used at the end of a conversation as a way of saying goodbye temporarily. GBFN usually indicates that contact will be re-established quite soon.

Examples of GBFN in Sentences

Here are examples of GBFN being used in conversations:

An Academic Look at GBFN

The abbreviation GBFN is normally used as a standalone declarative sentence (i.e., a statement) with the meaning "Goodbye for now”. GBFN is not often used as another part of speech within a wider sentence.

Example of GBFN Used in a Text

GBFN
Help Us To Improve Cyber Definitions
Please tell us using this form.