BB4N means "Bye Bye For Now." BBFN is used as a sign-off to end a conversation. It usually implies that the absence will be of a temporary nature.

When I write BBFN, I mean this: 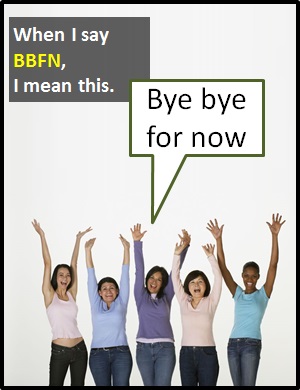 BBFN is a way of saying goodbye temporarily.

Examples of BBFN in Sentences

Here is an example of BBFN being used in a conversation: Jordan: Give her a hug from me. See you at the weekend. BBFN

An Academic Look at BBFN

BBFN is classified as a cyber term as opposed to an initialism abbreviation or an acronym. Initially, cyber term terms were introduced for brevity, but, particularly with the advent of predictive texting and on-screen keyboards, they are now mostly employed for fun. Cyber terms differ from icons because they are not pictorial representations.

Before the digital era, we might have said something like "catch you later" or "see you anon" instead of BBFN.

Example of BBFN Used in a Text

BBFN
Help Us To Improve Cyber Definitions
Please tell us using this form.