GALDEM is a slang word used to refer to a group of girls.

GALDEM stems from Jamaican patois (GAL = Girl, Dem = Them). However, it is now widely used to refer to any group of girls, especially in the UK.

When I write GALDEM, I mean this: 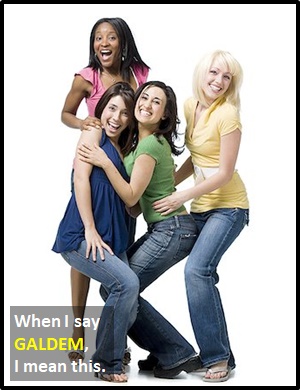 GALDEM is slang for a group of girls.

An Academic Look at GALDEM

GALDEM is a slang word which is used as a collective noun for a "Group Of Girls." Slang refers to words, phrases and uses of language that are regarded as very informal and which are often restricted to a special context or a particular group of users.

A collective noun is a noun (naming word) for a group of people or things (e.g., family, crew, colleagues).

Example of GALDEM Used in a Text

GALDEM
Help Us To Improve Cyber Definitions
Please tell us using this form.