What Does MANDEM Mean?

MANDEM is a slang word that is thought to have originated in Caribbean Pidgin English and is now widely used to refer to a "Gang" or "Group Of Male Friends." In the UK, the word MANDEM has been incorporated into the name of a number of street gangs, such as the Tottenham MANDEM, based in North London (which was implicated in the murder of a Police Officer in 1985).

The word MANDEM features prominently in the title and lyrics of African and African-inspired songs, including the 2019 song from "Afrofusion" singer Burna Boy:

When I write MANDEM, I mean this: 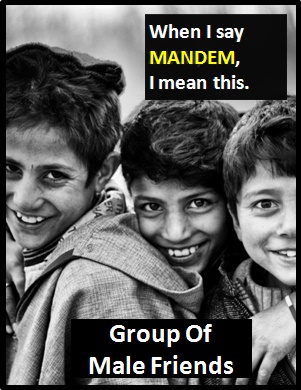 A MANDEM can be a group or gang of men or boys.

Examples of MANDEM in Sentences

Here are examples of MANDEM being used in conversations:

An Academic Look at MANDEM

MANDEM is a slang word which (like "Gang") is used as a collective noun for a "Group Of Male Friends." Slang refers to words, phrases and uses of language that are regarded as very informal and which are often restricted to a special context or a particular group of users.

A collective noun is a noun (naming word) for a group of people or things (e.g., family, crew, colleagues).

The use of MANDEM to refer to a "Gang" or "Group Of Male Friends" predates the digital era.

Example of MANDEM Used in a Text