What Does MIA Mean?

MIA usually means "Missing In Action." It is also the title of a song by Puerto Rican singer Bad Bunny and the stage name of British artist Mathangi "Maya" Arulpragasam. Here is more information about each of these definitions of MIA, together with examples of use.

The abbreviation MIA is a term used by the military (especially in the US) to refer to a service person who is "Missing In Action" (i.e., someone who has not returned from a military operation and whose fate is unknown).

Although "Missing In Action" has a military origin, MIA is now commonly seen on gaming forums and is also widely used to refer to anyone who has not been seen for a while. For example:

(Here, MIA is being used in its military sense.)

(Here, MIA is being used in its broader sense. It means that Toby has disappeared, e.g., gone home, met a girl, been left behind.)

Here's a short video explaining how to use MIA:

MIA is also the title of a 2018 song by Puerto Rican singer Bad Bunny, featuring vocals from Canadian rapper Drake. The song, inSpanish, was a worldwide hit:

M.I.A. (with periods/full stops) is the stage name of Grammy and Oscar-nominated Tamil/British rapper, singer, songwriter and activist Mathangi "Maya" Arulpragasam. Check out her 2015 release "Borders:

"Missing In Action" is the most common definition for MIA especially on gaming forums, as well as on Snapchat, WhatsApp, and Facebook.

MIA is the title of a song by Bad Bunny & Drake.

When I write MIA, I mean this: 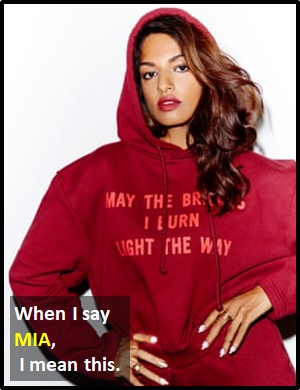 An Academic Look at MIA

When used with the meaning "Missing In Action," MIA is classified as an initialism abbreviation, as it is pronounced using its individual letters (i.e., "Emm Eye Ay"). It can be used as either noun (i.e., a naming word) or an adjective (i.e., a describing word). For example:

Example of MIA Used in a Text

MIA
Help Us To Improve Cyber Definitions
Please tell us using this form.