What Does FIFY Mean?

The abbreviation FIFY is often used in online forums to contradict something that another user has written. For example:

When I write FIFY, I mean this: 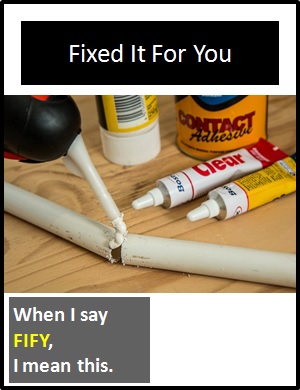 FIFY means someone has solved or "fixed" a problem for you.

Examples of FIFY in Sentences

Here are examples of FIFY being used in conversations:

An Academic Look at FIFY

Before the digital era, we might have said something like "I've sorted it for you" instead of using FIFY.

Example of FIFY Used in a Text

Selves-isolating (Locking down with a partner) FTFY (Fixed That For You) FYP (Fixed Your Post) NFY (Not Fixed Yet) BUH (Bosh!) ITSK (It's Okay) K (Okay) KNP (Okay, No problem) LMTAL (Let Me Take A Look) OKIES (Okay)