What Does FAAK Mean?

FAAK means "Falling Asleep at Keyboard." The abbreviation FAAK is commonly used online to let someone know you are so tired or bored that you are literally asleep at your desk.

FAAK shouldn't be confused with the Irish term 'feck', which has been described as a 'family-friendly' way of replacing the expletive 'f*ck' to show mild frustration or irritation.

When I write FAAK, I mean this: 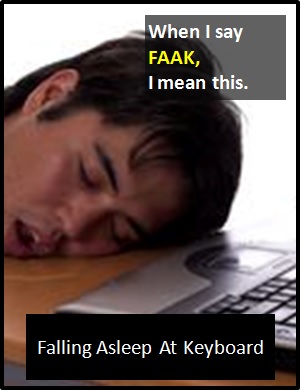 Examples of FAAK in Sentences

Here are examples of FAAK being used in conversations:

An Academic Look at FAAK

FAAK is typically used as an adverbial phrase of place. An adverb of place modifies a verb to describe where the verb occurs. For example:

(Here, FAAK tells us where the verb is occurring.)

Before the digital era, we might have said something like "I'm so tired I can hardly keep my eyes open" instead of FAAK.

Example of FAAK Used in a Text

FAAK
Help Us To Improve Cyber Definitions
Please tell us using this form.