What Does DILLIGAF Mean?

DILLIGAF means "Do I Look Like I Give a F*ck?". The abbreviation DILLIGAF is commonly used as a rude and abrupt way to show that you really couldn't care less about something or someone.

When I write DILLIGAF, I mean this: 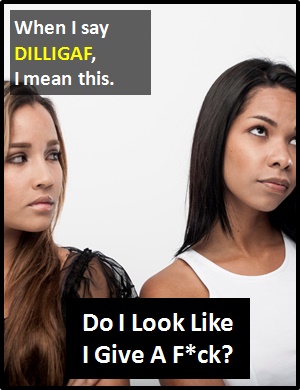 DILLIGAF is a rude way of saying "I couldn't care less."

Examples of DILLIGAF in Sentences

Here are examples of DILLIGAF being used in conversations:

An Academic Look at DILLIGAF

DILLIGAF is an acronym (i.e., an abbreviation spoken like a word). Acronyms differ from initialism abbreviations, which are pronounced using their individual letters.

DILLIGAF is commonly used as a rhetorical question; i.e., it is said for dramatic effect rather than to provoke a response.

Before the digital era, we might have said something like "I really don't care" instead of using DILLIGAF.

Example of DILLIGAF Used in a Text

DILLIGAF
Help Us To Improve Cyber Definitions
Please tell us using this form.