What Does COUGAR Mean?

A COUGAR is the term used for an older woman (typically in her 40s) seeking a sexual relationship with a younger man. The word COUGAR tends not to be used in a derogatory way. In fact, it carries a connotation of the woman being sexy, if a little predatory. COUGAR is one of several animal-related terms that have emerged to describe the age difference between male and female partners. For example:

When I write COUGAR, I mean this: 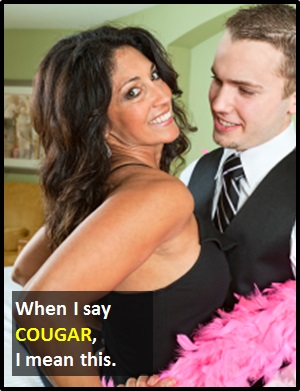 The image shows a woman (the "cougar") with a younger man.

Examples of COUGAR in Sentences

Here is an example of COUGAR being used in a conversation:

An Academic Look at COUGAR

The word COUGAR typically plays the role of a noun, but it is occasionally seen as an adjective. For example:

(Here, COUGAR is a noun.) (Although rare, COUGAR can also be used as an adjective.)

Example of COUGAR Used in a Text

COUGAR
Help Us To Improve Cyber Definitions
Please tell us using this form.