What Does CHU Mean?

CHU means "You." The abbreviation CHU is an informal, slang way of saying "you." It has the same meaning as CHOO.

The use of CHOO or CHU probably derives from terms such as "Look At You," in which the end of "At" and the word "You" make a "choo" sound.

When I write CHU, I mean this: 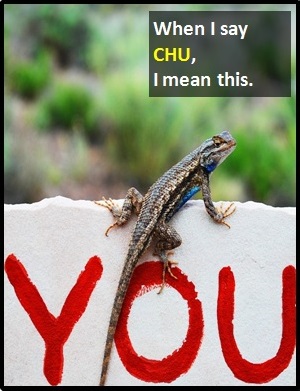 Examples of CHU in Sentences

Here are examples of CHU being used in conversations:

An Academic Look at CHU

The abbreviation CHU is a pronoun (I, me, you, he, she, herself, it, who, someone, everybody, etc.) A pronoun is a word that takes the place of a noun, i.e., a "naming" word. In the sentence "Nick saw Julie, and he waved at her," the pronouns "he" and "her" take the place of Nick and Julie, respectively.

Example of CHU Used in a Text