What Does CEO Mean?

When I write CEO, I mean this: 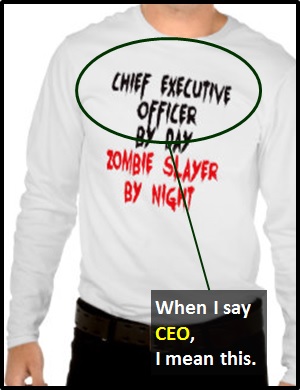 Sometimes called the President or Managing Director, the CEO is responsible for the company's success or failure.

Examples of CEO in Sentences

Here are examples of CEO being used in sentences:

An Academic Look at CEO

CEO is used as a noun. When the term is expanded, it is a noun phrase based on the common noun Officer. The words Chief and Executive are attributive adjectives modifying Officer.

Example of CEO Used in a Text

CEO
Help Us To Improve Cyber Definitions
Please tell us using this form.