What Does CB Mean?

The abbreviation CB is used with the meanings "Closed Beta," "Citizens Band" and "Cock Block." Here is more information about each of these definitions of CB. (Examples of use can be found below.)

The abbreviation CB is used in gaming and computing with the meaning "Closed Beta," to refer to games and software that are under development, but are considered almost ready for release. CB versions of products are distributed to a very limited number of invited users for testing in a real-world environment, in order to check for bugs and glitches before general release.

CB contrasts with OB (Open Beta), which refers to products that are made available to the public for testing before final release. (See also BETA.)

CB is also widely used with the meaning "Citizens Band," to refer to a type of radio which the general public is allowed to use for voice communications. In many countries (including the US and UK), no licenses are required for CB radios.

More colloquially, CB is used as an abbreviation of the slang phrase "Cock Block," to refer to anything (person, object or circumstance) that prevents someone from having sex. The "Cock Blocking" may be intentional or accidental. People who act as "Cock Blockers" often do so inadvertently, but may be motivated by jealousy, or by a feeling or duty of care.

When I write CB, I mean this: 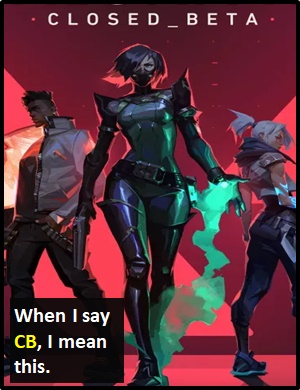 Examples of CB in Sentences

Here are examples of CB being used in conversations:


(Here CB is being used with the meaning "Closed Beta.")


(Here CB is being used with the meaning "Citizens' Band.")

An Academic Look at CB

As it is pronounced using its individual letters (i.e., "See Bee"), CB is classified as an initialism abbreviation. However, when used with the meaning "Citizens Band," CB is also an acronym (an abbreviation spoken like a word).

Example of CB Used in a Text

CB
Help Us To Improve Cyber Definitions
Please tell us using this form.