What Does BUD Mean?

The slang term BUD means "Friend," "Marijuana," and "Clitoris." BUD is also an abbreviation for Budweiser Beer. Here is more information about each of these definitions of BUD.

BUD is widely used as an abbreviation of the term "Buddy", which means "Friend."

When talking about recreational drugs, BUD is a nickname for the psychoactive drug marijuana, which is a mixture of the dried flowers of the Cannabis sativa plant.

Other popular nicknames for marijuana include HASH, WEED, POT, GANJA, MARY JANE, and 420.

BUD is also used to refer to the clitoris. (That part of the female anatomy described by author Chloe Thurlow as "...the only organ in the body designed purely for pleasure - more concentrated nerve endings than in the tongue, twice as many as in the penis. Proof that God is a Woman.")

Throughout much of the world, BUD is recognized as an abbreviation of "Budweiser Beer," an American beer produced by Anheuser-Busch (which is actually part of a Belgian company). In certain countries, BUD is also used to refer to a different beer, produced by the Budweiser Budvar Brewery in the Czech Republic.

"Marijuana" is another common definition for BUD.

"Clitoris" another definition for BUD.

BUD is also a nickname for "Budweiser Beer."

When I write BUD, I mean this: 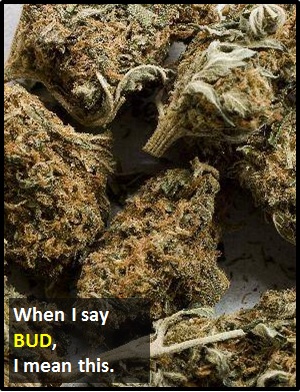 Example of BUD Used in a Text

BUD
Help Us To Improve Cyber Definitions
Please tell us using this form.