What Does BOL Mean?

BOL (Best Of Luck) is most commonly used to wrap up a conversation about someone else's future undertaking, and it is used in its literal sense (i.e., there is no connotation. It literally means "I wish you the best of luck").

Of note, BOL is occasionally used to mean "burst out laughing" as an alternative for LOL, but this is rare. It is also used on occasion to mean "bullsh*t," but this too is rare with BUL being the accepted shorthand.

When I write BOL, I mean this: 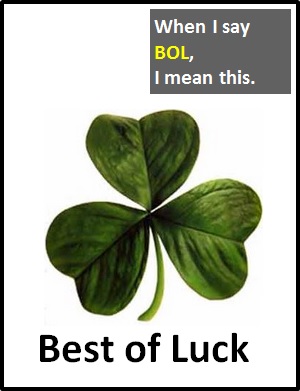 A 3-leaf clover is a symbol of good luck.

Examples of BOL in Sentences

Here is an example of BOL being used in conversations:

(BOL mostly features at the end of a conversation, but not always.)

An Academic Look at BOL

(It is also common for the preposition with to be included.)

BOL is an initialism abbreviation. Technically, this means it is pronounced using its individual letters (i.e., Bee Oh Ell), but as this is less intuitive to say than "best of luck," it is not often uttered using its letters. In other words, the abbreviation BOL is for efficiency in writing and not efficiency in speech.

Before the digital era, we might have said something like "happy landings" or "tight lines" instead of BOL.

Example of BOL Used in a Text

BOL
Help Us To Improve Cyber Definitions
Please tell us using this form.