What Does BKA Mean?

BKA means "Better Known As." The abbreviation BKA is typically used to provide clarification when someone or something is known by two names and the less familiar one has been referred to. For example: BKA can also be used in a light-hearted or sarcastic way. For example: BKA is similar in meaning to AKA (Also Known As). However, unlike AKA, BKA is not normally seen in the context of law enforcement.

When I write BKA, I mean this: 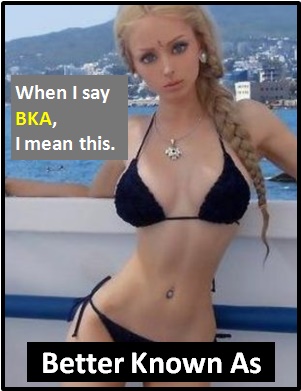 Examples of BKA in Sentences

Here are examples of BKA being used in jokes:

An Academic Look at BKA

BKA is an initialism abbreviation. This means it is pronounced using its individual letters (i.e., Bee Kay Eh). (Initialisms contrast with acronyms, which are spoken like words.)

Before the digital era, we would have just said "Better Known As" in full instead of using the abbreviation BKA.

Example of BKA Used in a Text

BKA
Help Us To Improve Cyber Definitions
Please tell us using this form.