What Does BAO Mean?

BAO means "Be Aware Of." The abbreviation BAO is typically used in text speak to mean "Be Aware Of," in the sense of "watch out for." For example: Of note, when spoken like a word, "BAO" is also a contraction of "gua bao," a snack food from Taiwan which consists of a portion of flat, steamed bread, filled with stewed meat and condiments.

When I write BAO, I mean this: 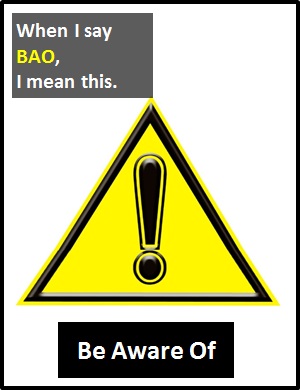 Examples of BAO in Sentences

Here are examples of BAO being used in conversations and jokes:

An Academic Look at BAO

The abbreviation BAO is used to form an imperative sentence. The main verb (i.e., "aware") is in the imperative mood, which is verb form used to make a command or a request. For example: As the abbreviation BAO is pronounced using its individual letters (i.e., "Bee Eh Oh"), it is classified as an initialism abbreviation. Initialisms are different to acronyms, which are spoken like words.

Before the digital era, we might have said something like "watch out for" or "be alert for" instead of using BAO.

Example of BAO Used in a Text

BAO
Help Us To Improve Cyber Definitions
Please tell us using this form.