What Does B2C Mean?

The term "Business To Consumer" is used to refer to commercial enterprises that sell products or services directly to private customers, rather than to other businesses. The abbreviation B2C is used widely with the meaning "Business To Consumer," even in print media and formal written communications.

B2C contrasts with BTB "Business To Business", which refers to enterprises that offer products or services directly to other businesses.

When I write B2C, I mean this: 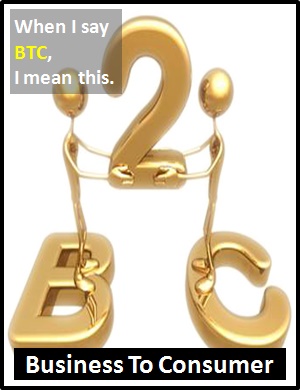 Examples of B2C in Sentences

Here's an example of B2C being used in conversation:

An Academic Look at B2C

In text-based communications, B2C is classified as a cyber term as opposed to an initialism abbreviation or an acronym. However, away from the digital realm, B2C is such a widely recognised abbreviation that it is often pronounced using its initial letters (i.e., "Bee Too See").

Example of B2C Used in a Text

B2C
Help Us To Improve Cyber Definitions
Please tell us using this form.