What Does ATTN Mean?

ATTN means "Attention." ATTN is typically used at the start of a message to ensure that the recipient pays attention. In other words, it is used to highlight that the message that follows is important. ATTN is often written in uppercase and followed an exclamation mark.

When I write ATTN, I mean this: 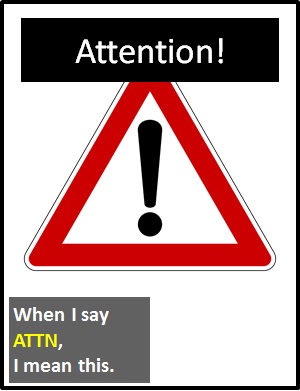 ATTN is a warning.

Examples of ATTN in Sentences

Here is an example of ATTN being used in a conversation:

An Academic Look at ATTN

Example of ATTN Used in a Text

ATTN
Help Us To Improve Cyber Definitions
Please tell us using this form.

ATTN (attention) FEA (for everyone's attention) AYL (are you listening?)