ATD means "Attention To Detail." The phrase "Attention To Detail" is typically used when describing the personal attributes required of an applicant for a job. It indicates that the candidate should be capable of demonstrating thoroughness and accuracy when completing a task.

In text-based messaging, the abbreviation ATD is typically used in a friendly, sarcastic manner, as a form of mild rebuke for someone who has made an error through forgetfulness or through not paying attention.

Of note, Sir Arthur Conan Doyle's Sherlock Holmes and Agatha Christie's Hercule Poirot both exemplify extreme ATD. Both these detectives are renowned for their ability to solve cases through their exceptional "Attention to Detail."

When I write ATD, I mean this: 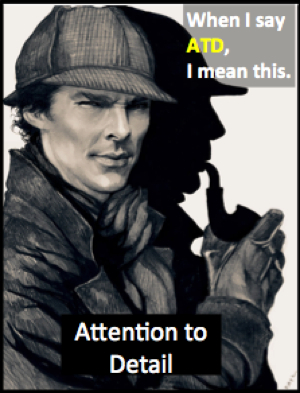 Examples of ATD in Sentences

Here are examples of ATD being used in conversations:

An Academic Look at ATD

As it is pronounced using its individual letters (i.e., "Ay Tee Dee"), ATD is classified as an initialism abbreviation. Initialisms are different to acronyms, which are spoken like words.

ATD is typically used as a noun (i.e., a naming word). For example:

Before the digital era, we would have just said "Attention To Detail" instead of using the abbreviation ATD.

Example of ATD Used in a Text

ATD
Help Us To Improve Cyber Definitions
Please tell us using this form.