What Does ATA Mean?

ATA means "Actual Time of Arrival." ATA is an abbreviation most commonly used with the meaning "Actual Time Of Arrival." This is the date and time at which an object or person in transit actually arrived at a point, which may or may not be the final destination; e.g., "The ATA of the bus from Philadelphia was 5:40 pm. It is now en-route to New York."

Although ATA is a formal abbreviation, commonly used in the transport industry and military, it is also quite widely used by the general public.

When I write ATA, I mean this: 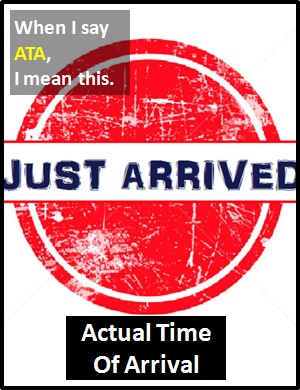 Examples of ATA in Sentences

Here are examples of ATA being used in conversations:

An Academic Look at ATA

ATA is an initialism abbreviation. Technically, this means it is pronounced using its individual letters (i.e., "Ay Tee Ay"). Initialisms are different to acronyms, which are spoken like words.

Before the digital era, we would have just said "Actual Time of Arrival" instead of using the abbreviation ATA.

Example of ATA Used in a Text

ATA
Help Us To Improve Cyber Definitions
Please tell us using this form.