What Does ASP Mean?

ASP means "At Some Point." The abbreviation ASP is typically used in text-based communications with the meaning "At Some Point"; i.e., at an unspecified moment in time, usually in the future.

Of note, the word ASP was the historic name of the Egyptian Cobra, a highly venomous snake. According to some accounts, in the 1st century BC, following the defeat of her army by the Romans, Queen Cleopatra committed suicide by allowing an ASP to bite her.

When I write ASP, I mean this: 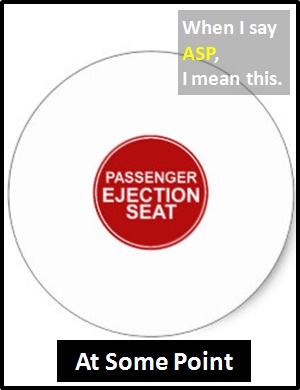 ASP, we have all wanted one of these!

Examples of ASP in Sentences

Here are examples of ASP being used in conversations:

An Academic Look at ASP

ASP is an initialism abbreviation. Technically, this means it is pronounced using its individual letters (i.e., "Ay Ess Pee"). Initialisms are different to acronyms, which are spoken like words.

Before the digital era, we might have said something like "One Day," "Soon," or "At Some Point" instead of using ASP.

Example of ASP Used in a Text

ASP
Help Us To Improve Cyber Definitions
Please tell us using this form.