What Does ASDFGHJKL Mean?

The letters ASDFGHJKL are used to represent intense emotion, such as frustration or excitement. Here is more information about ASDFGHJKL, with examples of use.

The letters ASDFGHJKL are the keys on the second row of a standard "QWERTY" keyboard. It is typed (usually in lower case) by running a finger over the keys from left to right.

The use of ASDFGHJKL usually implies that the sender was lost for words because they were so excited. However, depending on context, it could also show frustration or anger. For example: In touch-typing, the second row of the "QWERTY" keyboard is known as the "home row," as that is where the four fingers of each hand return to as a base. The fingers of the left hand rest on the letters A, S, D, and F, while those of the right hand rest on H, J, K, and L.

Here's a short video explaining how ASDFGHJKL is used:

When I write ASDFGHJKL, I mean this: 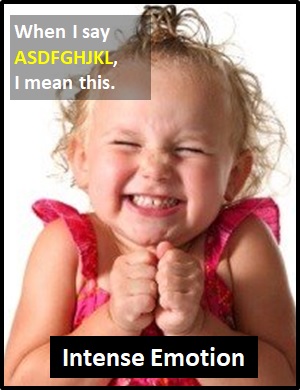 ASDFGHJKL conveys intense emotion, such as frustration or excitement.

An Academic Look at ASDFGHJKL

ASDFGHJKL is used as an interjection. An interjection is not grammatically related to any other part of the sentence. It is included in a sentence to express a sentiment such as surprise, disgust, joy, excitement, or enthusiasm.

Example of asdfghjkl Used in a Text

asdfghjkl
Help Us To Improve Cyber Definitions
Please tell us using this form.