AMOF means "A Matter of Fact." The abbreviation AMOF is typically used in text speak to emphasize a point that has been made. AMOF can also be used to introduce disagreement. For example:

Of note, AMOF can also be written as AAMOF (As A Matter Of Fact).

When I write AMOF, I mean this: 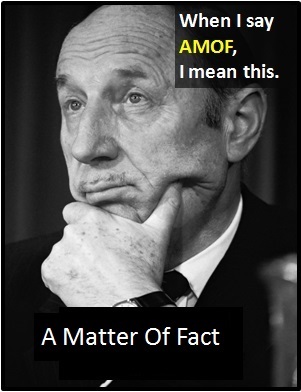 AMOF means "A Matter Of Fact."

Examples of AMOF in Sentences

Here are examples of AMOF being used in conversations:

An Academic Look at AMOF

As it is pronounced using its individual letters (i.e., "Aay Em Oh Eff"), AMOF is classified as an initialism abbreviation. Initialisms are different to acronyms, which are spoken like words.

Example of AMOF Used in a Text

AMOF
Help Us To Improve Cyber Definitions
Please tell us using this form.