What Does AMA Mean?

AMA means "Ask Me Anything." It is a chat topic or general discussion forum thread. Users can ask the OP (Original Poster) questions relating to a specific aspect of their life, fame, or career. The term AMA has been in usage since the 1990s. Its origins began in an AOL chatroom. As the chatroom was placed in a romance category, the questions were of a sexual nature. Since Reddit opened in 2005, AMA lost its sexual tones and became more popular because of a subreddit dedicated to the topic.

Not all AMA threads are hosted by high-profile people and celebrities (though these are the most popular and well-known ones). Normal people with interesting jobs, or interesting experiences can also host these online interviews. Some of the most notable celebrity AMAs on Reddit are: When a celebrity hosts an AMA, they usually post proof to prove it's really them answering the questions. Here is the picture Bill Murray posted with his AMA: 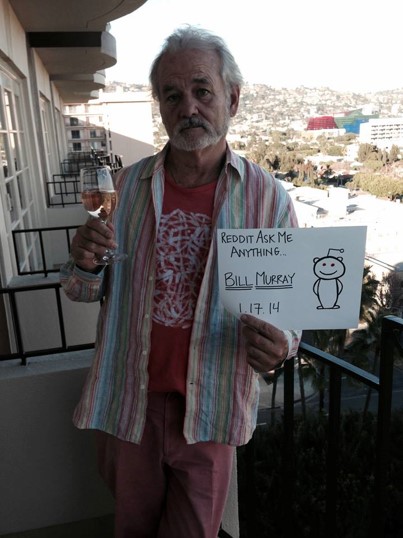 If you google the term AMA, Reddit is the first website to appear. It is the most popular place for the discussions to take place. In recent years, YouTubers have made AMA videos. They encourage their subscribers can post their questions on Twitter, or in the YouTube comments so they can answer them in a follow-up video.

When I write AMA, I mean this: 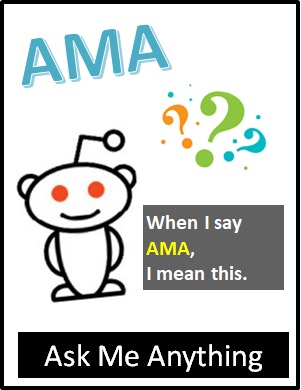 [The image shows the logo for the website Reddit. This is where AMAs (Ask Me Anything) became popular.]

Examples of AMA in Sentences

Here are examples of AMA being used in conversations:

An Academic Look at AMA

As it is pronounced using its individual letters (i.e., "Ay Em Ay"), AMA is classified as an initialism abbreviation. Initialisms are different to acronyms, which are spoken like words.

Example of AMA Used in a Text

AMA
Help Us To Improve Cyber Definitions
Please tell us using this form.